Restoring an old favorite into a modern cruiser

You would be surprised at the heads that will turn when riding an old single speed bicycle around town.  My stingray received a new lease on life when my buddy and I decided to transform them from ugly, functional cruisers with nice lines into an eye catching bicycle from yesteryear.

I purchased my Schwinn Stingray at a bank yard sale in Wolfeboro, New Hampshire for 30$. It was red, white and blue, with streamers and a glitter seat.  It was missing spokes, and was a very ugly bike. I didn’t care much because I planned to spray bomb it a copper brown.  I leather wrapped the seat and rode it like that for several years. My buddy John Hansell also had a similar bike long before I had mine, which gave me the inspiration to find one.  His is made by Raleigh but the model is undetermined.

We would ride the ‘lowriders’ as we called them around town as a change of pace from our mountain bikes. One day we decided to completely tear them down to the frame and restore them the right way. This project site chronicles some of what we went through, as well as contains some additional information about these bikes, places to get parts, problems we have had along the way, and how we use them today

Much of the parts we used were purchased from the following distributors.

If you end up purchasing your own Schwinn Stingray, you may be curious to know what vintage it is. The frame codes can be referenced with this PDF to determine the year. 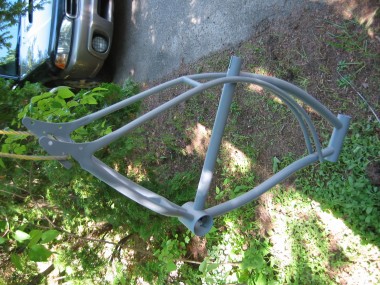 We began by dismantling the entire bike, building a sandblasting enclosure using a large cardboard box, and sandblasted the frame to remove all of the paint.  Once the frame was down to bare metal, we cleaned it thoroughly and began the filler work describe. 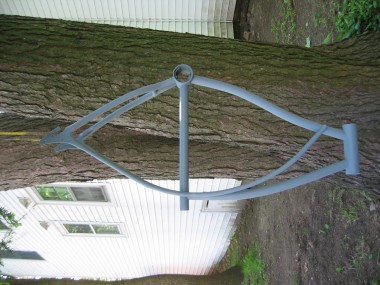 This project was completed back in 2001 and I do not have as many photos of the process as I would have liked, but the few that I have help to show some of the important parts of the process. 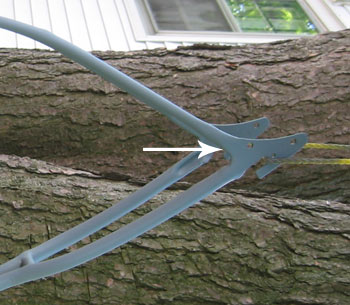 I wanted to make the bike look smoother where the spot welds in the frame were.  There are only a few areas on the frame to do this, the most notable being where the rear wheel attaches to the frame.  The other location we used body filler to smooth out the frame was on the 2 inch crossbar at the bottom left of this photo.

While this work took us many hours to complete, it paid off by giving the frame the smooth look that we were looking for.  Look for ways you can customize your project and you’ll find little areas of work here and there can add up to. 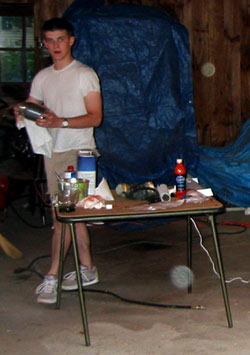 We used a compressor powered paint gun used in the automotive industry to paint the cycles.  The paint we chose came from NAPA and cost about 50$ each for the paint and hardener, which we mixed ourselves prior to spraying.  We used one-step paint and did not have to clear-coat the frames to get a good shine. 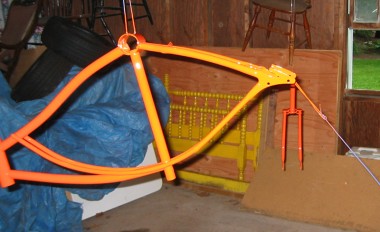 It is important to spray the hard to reach areas of the frame and forks first, and to apply the paint in very light coats as to not run the paint around the tubular bars of the frame, which are notably very difficult to spray without running.

You must also take into account how long much time you wait before putting on the next coat.  Too little and you will run your paint, too long and the paint will dry and will not bond correctly with the next coat.  This will result in chipping.  Too much paint will also result in easier chipping, so be sure to get the best coverage you can without putting on the paint excessively thick.

END_OF_DOCUMENT_TOKEN_TO_BE_REPLACED 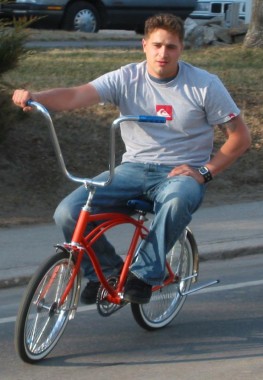 The build was a fun and satisfying project.  Being able to use the bike after the build is very rewarding.  I built the bike in 2003 and have been riding it in the summer months of my small town ever since.  The total cost was reasonable for a bicycle that I would happily display indoors during the winter months.  I truly think of it as a great, affordable modern showpiece.

I would suggest a bicycle restoration to anyone looking for manageable project, who is willing to get their hands dirty, can enjoy working with paint, and who is mechanically minded.  The final fitment of the parts was one of the more challenging parts of the project, getting everything lined up, torqued and setup correctly took some time.

Hope you enjoyed my build and will consider one of your own some day.  Leave me a message through the contact form if you have any questions about the bike.